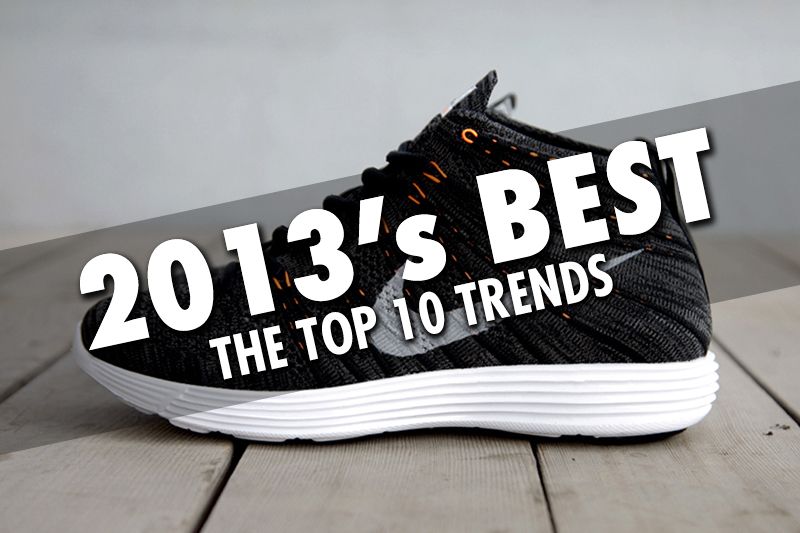 2013 was the year of the high-low steelo, with fashion trends embracing the homogenous mash-up that high fashion and streetwear are looking more and more to be.  It truly was a fun year for hip hop and street fashion, as the cross-over appeal between the high fashion houses and cool guy streetwear produced aesthetics that championed a spirit of versatility and variety, while still maintaining that necessary uniqueness that translated to some next level swaggery for those that were up on things.  Click through to check out 2013’s top streetwear fashion trends.

Who knew that pairing tailored sweatsuits, joggers, and running sneakers with dressed up elements would prove to be the move for 2013.  The cozy boy movement started late in 2012, but maintained its momentum and bodied every look in 2013.  So thanks to this trend, you too can be the next streetstyle cool guy by looking like the steeziest lap-running, concrete-pounding, faux-fitness cat that Instagram’s ever seen.

Leather jackets, M-65’s, bombers, flannel, ripped jeans, Docs, shorts over leggings – thrift-store drab meets streetwear cool was what many outfits looked like in 2013.  Seeing A$AP Mob and Kanye throw on flannels around their waists and channel their inner Eddie Vedder was the wave and had plenty dudes running around looking like the next-coming of Pearl Jam/Soundgarden/Nirvana.

I’m very certain that your stylish self would have easily been caught pairing up some sort of Lunarlon, Flyknit, Retro-inspired, Zoom Flight, Jordan type of kicks with your already #OOTD worthy ensemble.  Yes, the swoosh dominated fashion trends this year, generating a massive shift into the brilliance of dressing down high fashion tendencies with some athletic sensibilities.

Yes, it really happened. Sporting what may very well be your grandpa’s new favorite fishing hat wound up being what was really good in 2013.  Thanks to proponents of the bucket hat such as A$AP Rocky, Earl Sweatshirt, Joey Bada$$, and most notably, Schoolboy Q, dudes were out here looking like some trendsetting anglers – giving new meaning to “fly fishing”.

Admit it, you probably rocked a top of some sort this year that had a number on the back on some varsity team steez gawd tip.  Though what started off as a novel concept of implementing sportswear and jerseys into high fashion and streetwear, quickly turned into an over-saturated market rife with every t-shirt looking like it needed to have a number and arbitrary name or word on the back.  What’s more, the stupid levels of OD spilled onto raglans, baseball jerseys, and hockey jerseys.  Special consideration goes out to those brands and fresh individuals alike that knew how to flip the trend correctly and managed to stay unique from the mass jersey-hysteria, but I’m hoping 2014 sees less of this.

Brands such as Brian Lichtenberg, COI, Junya Mafia, and Reason really were at the forefront of this trend, bringing up how imitation really is the best form of flattery.  With streetwear’s long history of flipping the norm and putting their own spin on already established logos and graphics, the natural wave of seeing high fashion parody shirts on plenty of individuals this year was easy to comprehend.  And once again, high-low, was what was really good this year.

When in doubt, throw on some black and stay playing the part of relevancy.  With Been Trill, Hood By Air, SSUR, Black Scale, Fear of God, En Noir, and Pyrex causing all kinds of ruckus in the fashion realm this year, it’s easy to say that stepping out the house like you’re the streetwear reincarnate of Johnny Cash was the norm.  Though long established as a go-to theme for many of hop hop’s notable trendsetters, the all black everything swerve was still a dominant look in 2013.

Wil Fry, Been Trill, and Hood By Air were some of the main suspects that had cats looking like NASCAR race cars.  With what can be said as high fashion’s further descent into the streetwear realm, the platform of all-over logo design proved to be a strong niche trend in 2013.  The hype was definitely real on this one, proving the underlying theme of the habitual line stepping high fashion has been taking over onto streetwear’s side.

Five panel caps were the “Call Me Maybe” version of fashion accessories this year, finding themselves on the heads of hypebeasts, cool guy fashion bloggers, and even menswear elitists alike, and reaching a fever pitch of hype to the same tune as the annoyingly played out song itself.  Brands jumped on this steez quicker than Precious on a cronut in the middle of the Sahara Desert, throwing any and all kinds of prints on five panel caps and peddling them to everyone in 2013.

Look man, any trend that lets me rock Killa Cam in his infamous pink luxury or Kellz shedding a tear or two, is perfectly alright with me.  Now what ruins things for everybody is when brands continue to throw out shirts with sublimated prints of church cathedrals, King Tut, random Renaissance era paintings, cheetahs surrounded by stars, something that looks like it could be Napoleon’s wallpaper, and a scene portraying Paul Revere’s ride.  Kill all that noise, really.