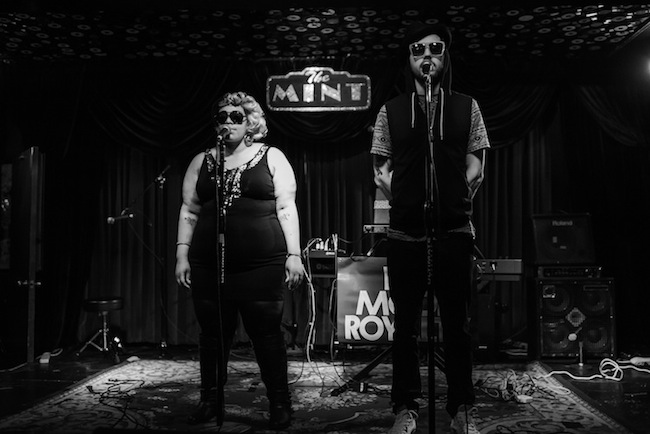 The most unlikely duos tend to make the dopest music together: from Outkast to James Blake and Chance the Rapper, the melding of the minds can be a beautiful thang. Forming a yin of choice beats and eclectic stylings to a yang of lyrical flows and buttery soul, Fly Moon Royalty is one duo personifying the Rob Base & DJ E-Z Rock-notion of it takes two to make a thing go right. Made up of song writer-songstress Adra Boo and producer/MC Mike “Action” Illvester, the duo just released their latest EP, “Unfinished Business,” putting a fresh new take on their hybrid brand of R&B/electronic soul. Always moving on a feeling, the duo have a heavy catalog of projects and LPs, steady working on new material to expand their sound and their craft. The 5th crew caught up with the Seattle pair right before they hit the stage at The Mint last week to talk about the new project, their creative process, and a typical moonlighting session at their day job. Hit the jump to check out the full interview.

Mike: Yeah, it’s been busy. We have our first tour, (and are) just balancing a lot of things hitting all at the same time – it’s been a real test of time management, but it’s all great, it’s just things all just happening all at the same time. We’re all still at the beginning of it, so my answer next week at this time might be a little different and it could be good or bad, but overall things are really good right now.

5th: You just released the “Unfinished Business” EP yesterday, have you guys heard or read any of its reception yet?

A: There’s been some articles that have been posted, some blogs have hit it up and so far people enjoy it. Everything that we’ve read up to this point has been super positive and a lot of people who fuck with us are so into it – I’ve been getting pinged for it being bought on bandcamp, but it’s still early.

M: It was good though, you know AfroPunk hosted the release so they did a write-up for it and that was super positive, and a couple blogs wrote about it, and honestly, it’s been some of the best write-ups we’ve had – like not one person just copy-pasted something from someone else, they all had their own well thought-out insight on it. 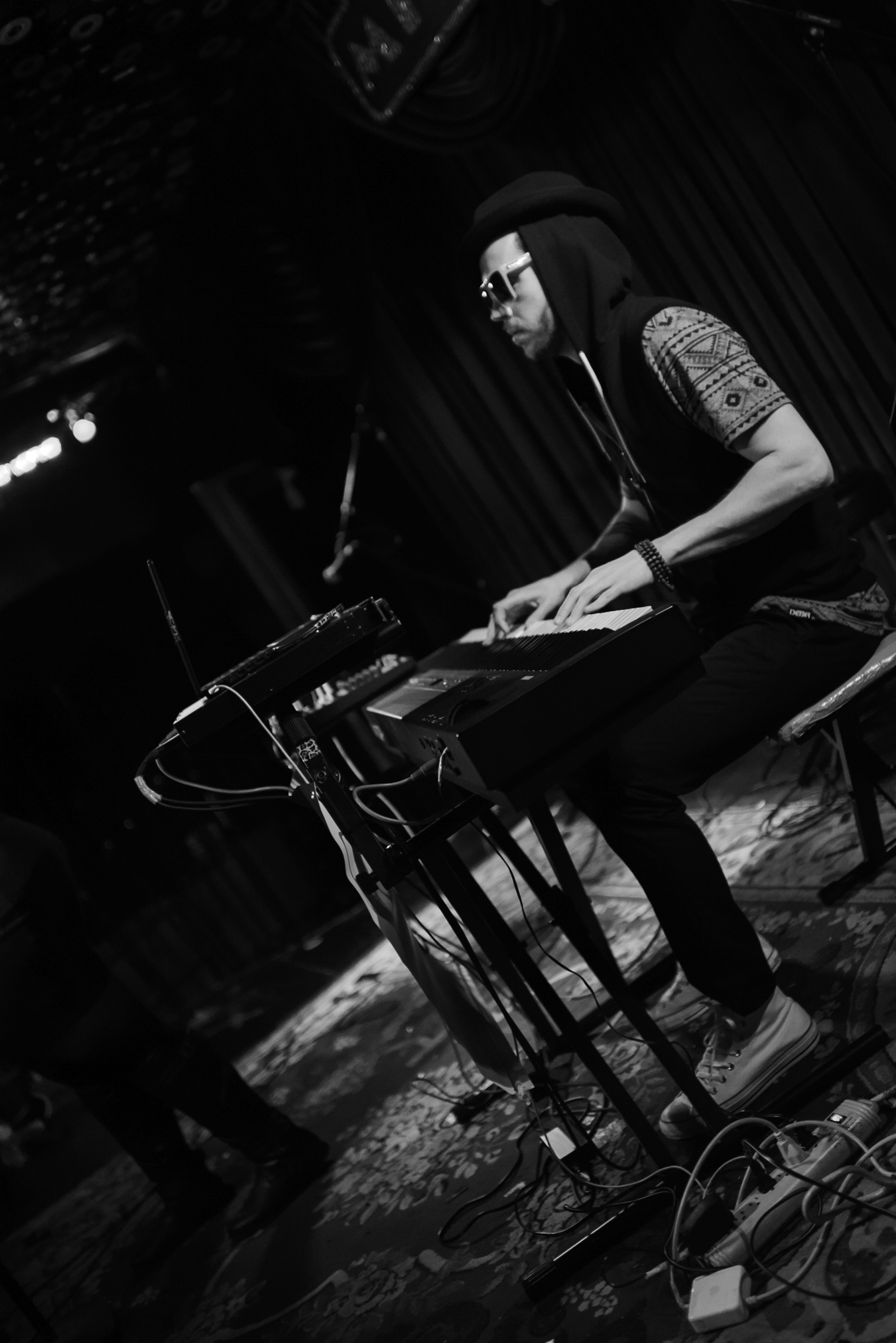 5th: Just to backtrack a little bit, you started working together because you met each other at a job and started talking about music. At what point, whether it was in that initial conversation or a little later in the relationship, did you guys come to that initial idea to start working on music together?

A: It actually might have been that day, because literally, we were both in different bands. Mike had only been in Seattle for five months and he was with his former band mate, and I was with my former band mate – we didn’t have a producer. We were just recording over tracks and so as soon as he (Mike) said that he produced, a lightbulb went up in my head. Just within us working together, I was like, ‘so.. how are we going to make some things happen?’

5th: What was the transition from just helping each other’s respective (music) acts to forming a group together?

A: So I had this disc with these four random songs we had done on there, and he’s all, ‘alright, if you want to sing on stuff for my group,’ – it was like a you-scratch-my-back-I’ll-scratch-yours type thing. He would send me beats for my group and I would ask him what’s the scope on this one track and he’d fill me in. Whenever we weren’t at work, I’d try to put something together just based off the details he gave me. When it came for the stuff he made for my group, we’d meet up early and go through a run-down on what I wanted those tracks to be like. He recorded me once, behind my back.

M: Yeah, I remember watching it and just thinking it was the dopest thing I had ever heard. She was just buttery on these tracks that my former group and I had. There was this one track, probably the first one we ever made, called “Android Love,” from the first album – I loved this track and originally my band mate had attempted to write on it, and it just wasn’t happening. So I gave it to Adra and let her play with it, and she had added all these layers to it and 15 seconds in, and I was blown away. She made the song better, and from there I was sold; I was like, ‘that was all I needed to hear’ to be convinced. So we recorded that song, then we did another one called “Do What You Say,” which turned out really dope too, and that’s when we started thinking about maybe doing a side project.

5th: Did working a day job together affect the way you guys collaborated?

A: The benefit about working (at an outside job) with someone in your band is that we would work different sections – he worked in the back and I worked in the front – so when I would head into the back, he’d be playing some tracks he made years ago and I’d hear them and just want to make something dope out of it, the stuff he played back there would totally peak my interest.

M: Forty percent of those beats I had were when I was back in Michigan, and were all hip-hop focused. Adra would take them and flip them in a way that I would have never thought of.

A: Then I’d write to it and then go in the back and sing it right there.

M: We would collab in some fashion. All my lyrics would be written on little sheets of liner paper, hers would be written on butcher paper – essentially the first two projects were written at work. You could just sit there for hours and listen to music and write – and honestly I kind of miss that creative process.

M: We’re still kind of in the same groove, luckily we spend a lot of time in that perfect incubator of collaboration when you spend a lot of time together. When you get to know somebody, you know the details, like their personal lives. There are many songs where we’ll have parallel situations. “In The Woods” I wrote the instrumental music about a very specific situation and Adra’s bit was perfect – that was one of the more conscious successes creatively we’ve had because it was like the intention was there long before it was created. We set a purpose and a mood, and we each did our part to meet our focus. We don’t make whole records and then move on to make a whole separate record; we’re constantly working. So the process never actually really stops. When we make a song together that we think is really dope, that’s the addiction, that high, that moment when you know it’s really good.

A: Sometimes when we’re practicing, he’ll start playing something that he was working on earlier and then I’ll just start to write to it. Our process is super organic; things just happen. We’re just in the space. Sometimes you just gotta move on a feeling. We’re so visual. Sometimes I’ll think something like, “oh, this sounds like you’re sitting on a porch and this is going on, etc.”

M: That’s why I like keeping the process fluid. We can stop working right now, and if we finished everything that we’ve started, we could still put out a few other EPs, maybe even another album. It’s like a sketchbook of concepts. “Piece of Me” started with me just playing this one bass line and the rest of the song grew around that. Originally we were supposed to record a completely different song but we changed gears the very last minute before we hit record.

5th: Essentially you guys feed off of each other.

M: That’s exactly how it is, but that’s how a partnership is supposed to work. We both seem to just be on the same page all the time, strange as it sounds, but it is because we both move on a feeling. I make this joke sometimes, where we’re the co-ed Outkast – I’m Andre and he’s Big Boi, where we’re kind of opposites, but use it as our strengths. We can also encourage each other to push further, like Mike was saying how this year he’s going to get more on the vocals with me. Before with his old band he stuck to being the producer, but I heard him spit once and was like, “you need to get on vocals with me.” We definitely encourage each other to step outside of the box, but you can’t do that without that good partnership, or else it won’t work.

5th:  “Unfinished Business” sounds like it has a more electronic approach when compared to the previous projects you guys released. Where did that come from?

A: It’s funny with that question because people do notice those nuances and ask us about it, but we never actually think about what exactly are we trying to sound like. We’re just moving.

M: It’s like we record, stop and look back and ask ourselves, “What just happened?” Before “Unfinished Business,” our sole focus was dedicated to our album. So creatively, I was just really excited about releasing that (“Unfinished Business”) material. That actually came about because I was mixing the music and a friend came by the studio and asked what I was doing. I said, “Just working on this EP, just working on some unfinished business,” because that’s what those songs were. They’ve been part of our lives for a long time because we’ve actually been performing the songs off this EP live for so long. It’s just really good material and we wanted these tracks to be heard – I remember sitting back and thinking, “wow that’s a strong little EP for a five-track project.” One review called it “a mighty 12 minutes.” (Laughs)

A: With the songs on this EP, it’s like sending the kids away to college  to make room for the new ones. I’m really excited for the next project after this that’s going to come out later this year, because no one has heard any of those songs. With this as our third project in, it’s a bit different this time ’cause we’re constantly growing as we work on our craft. Every time I step up to the mic, it’s a different approach because I learned something from our last session. Same with Mike, when he mixes now, he knows to look for different things and listening for certain things. We’re constantly learning and growing as artists and you can see that throughout our music if you follow the discography.