Amidst all the hype, hoopla and speculation surrounding the top prospects of the 2014 NBA Draft, one crucial decision was in their hands for the night – what to wear.  Although the decision may seem simple enough compared to the complexity of ones related to their new-found pro basketball careers, we have guys like Samaki Walker to remind all that one’s sartorial choice may require a little more thought than the norm.  Per the usual, you had your examples of extraordinary swagger and also absolute buffoonery.  We’re here to sound off on who came through in the clutch with their outfits and who was shooting style bricks out there.

Man, what?  Somebody tell me why this dude is wearing a pattern best suited for women’s panties?  Although it might be quite telling, as A.Wiggins is about to find out that the Cavalier organization just might be on the same level of awful as his outfit.

Verdict:  Air balling both of your free throws.

Yung Jabari’s suit game was just as refined as his NBA-ready set of basketball skills.  I mean check the deets: well-tailored fitting, peak lapels with the clean tonal combo of black, white and grey and subtle pops of ‘I do this’ with the red lapel flower and white pocket square.  That Jordan brand tie bar is obviously a hint that the Jumpman is already messin’ with him on the low.

Verdict:  A clutch three-pointer at the buzzer.  With your mama watching front row.

Look man, I’d have the same reaction to being drafted, too, if I knew that millions of people might mistake me for the valet guy with this outfit on.  His level of exuberance matched his ensemble perfectly.

Verdict:  Nothin’ but the back of the rim.

I dunno man.  All I can think of when I see Aaron Gordon’s fit is Apocalypse from the Marvel Universe.

Verdict:  Double-dribblin’ out there son. 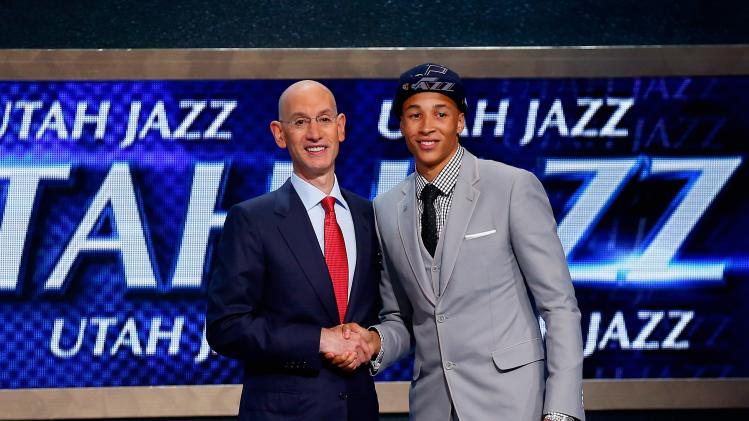 For someone who’s touted as having such a dynamic and potent style of play, it sure didn’t translate with his outfit of choice.  Dante could have taken his level of swag up a few notches with some subtle pops of anything, but overall he chose to set up shop in the vast wasteland of mediocrity.  Buttoning up both buttons on a suit jacket?  Yeah man, nah.

Verdict:  Layup.  Not even a finger-roll.  Like the ones from WNBA highlight reels.

I see you, Marcus.  You almost put it all together on this one.  Really, you did.  But opting for the sky blue bow tie instead of a black one really fouled things up on the low.  Overall, not mad at your swagger, kid.

Verdict:  In and out.  Almost a swish.

For the most part Julius Randle is as solid an NBA prospect as they come, possessing the skills to be one of the few NBA-ready talents in this year’s draft class.  However, most scouts did knock his lack of length, with a wingspan that was sorely lacking for someone of his stature and the position he plays.  Dude didn’t do himself any favors last night by rockin’ a suit jacket that was a touch too long, thus exacerbating his T-Rex arms stigma.  Oh, and last night’s draft really had an epidemic of over-sized and corny bow ties.  Stop it.

Verdict:  Traveling.  Dude let his pivot foot slide on this one.

Fella’s suit is wild OD’ing on the window panes.  Looking like bathroom tile is not the way to go to get your outfit on and poppin’.

Verdict:  Posted on the bench.  You not even in the game on this one, pal.

You know you got a problem when your shirt collar matches exactly with your tie and nothing else.

Verdict:  *throws up hands and leaves*

I can tell Elfrid’s got a bit of low-key flash about his style, what with the Boondocks-level hair-do, subtly high level timepiece and double-breasted suit.  The effort’s there, with execution more than likely being refined as his sartorial journey progresses.

Verdict:  Draining that baseline fadeway like it was automatic.

The diabolical levels of Dad Swag here are off the charts.  Dougie McBuckets definitely dropped stacks at the local Men’s Wearhouse to achieve such levels of parental steez.

How does one say ‘no-sign’ in Croatian?

Verdict:  Like his shot got blocked by little Nate Robinson.