Just as any year before it and sure to come, hip-hop’s 2015 was momentous, disastrous and triumphant in a slurry of events, often dissected both as mega and minutiae. There were beefs, there were memes, there were endorsements and reunions. We saw many a classic album hit a milestone and many a rapper ignite and combust under his own feats. For every troll, there was a champion. Hip-hop frequents the role of culture defier and definer and this year was no different: in 2015, rappers endorsed presidential candidates, the Drake and Meek Mill beef flipped the stigma of ghostwriting on its head, hip-hop had its first musical, came to Islam’s defense, proved that paying your respects is crucial and that curses are very, very real. Read below to see which were 2015’s best hip-hop moments.

It’s decided. I’m voting for Bernie. Throughout his campaign the Vermont senator has long aligned himself next to and been an advocate for the little guy – minorities, the working class, the poor. He’s known to still fly in coach, an example that’s interpreted as he’s relatable and respects tax payers’ money to not blow it by flying in a private jet. To top that off, he’s friends with Killer Mike. Last year, Killer Mike’s impassioned speech following a grand jury’s decision to not indict the Ferguson police officer responsible for the death of unarmed teenager, Mike Brown, plunged deep. He expressed anger and contempt towards police culture, the justice system and the connection to institutionalized racism that’s plagued the country for years. The context of his speech was nothing new, but to be of the few rappers that choose to use their platform to say something substantial in such times was invigorating. That same impassioned vernacular was seen again earlier this year when Killer Mike introduced Sanders at an Atlanta rally, using his own lyrics to express, “I have said in many a rap, I don’t trust the church or the government, a Democrat, Republican, a pope, a bishop or those other men. But after spending five hours tonight – after spending five hours with someone who has spent the last 50 years radically fighting for your rights and mine – I can tell you that am very proud tonight to announce the next president of the United States, Sen. Bernie Sanders.”

Drake vs. Meek Mill beef (and the resulting Grammy nomination)

I’m struggling to figure out if this whole ordeal was actually a beef, because I would think that a traditional rap beef requires clapbacks. But for all the ammo that Meek Mill had over Drake (nail-in-the-coffin ghostwriting accusations) he didn’t know how to unload it. At the end of it all, Meek Mill is rap’s equivalent of Jason Pierre-Paul: lighting the firecrackers is a great idea and all, only to realize to the fireworks are too hot to handle. The more interesting feats to arise out of the beef brought to light questions of ghostwriting and authenticity in rap and Drake’s emergence as “tough, buff Drake,” knocking off the heads of every member of #DrakeHive, ages 16 to 43, with Instagram posts of Aubrey flexin’ on ’em, literally and figuratively. Okay, so the beef itself was lackluster, but thanks Meek, there’s still a whole lot of win out of your Hamburger Helper drama: the world got two new Drizzy tracks out of the ordeal, with “Back to Back” up for a Grammy, AKA the world’s first ever Grammy-nominated diss track. Question: does Meek get credit for his involvement in “Back to Back?” Time will tell.

2015 marked the 25-year anniversary of A Tribe Called Quest’s debut, “People’s Instinctive Travels and the Paths of Rhythm” and to go with an ill 45s box set to mark the milestone, the entire tribe reunited on Jimmy Fallon’s The Tonight Show to perform “Can I Kick It?,” years after the group last performed at the 2008 Rock the Bells tour. Followers of ATCQ knew of the bad blood that existed between members, but it was refreshing to see all four grace the stage together once more and prove that Tribe’s music is just as fresh and everlasting now as it was when they broke the mold in 1990. Can we assume that they’ve all made up? Not necessarily, but these men are professionals just as much as they are moguls, and proved as such over the last quarter century.

This one’s personal. In a span of two tweets and about 45 minutes, a quiet night in Los Angeles turned into a marathon chasing after the most sought after artist at that moment in time: Kendrick Lamar. Fresh off of his “To Pimp a Butterfly” release and its far and wide reception, chasing KDot on the back of an 18-wheeler on a shut down Sunset Boulevard with copious amounts of Korean BBQ in my belly was not on my Tuesday To-Do list. Regardless of the havoc that comes with chasing down Compton’s finest, the high from TPAB’s brilliance was still very new at the time, and seeing its creator in the flesh magnified the record’s resonance tenfold…even if it meant running a mile in boots and losing my dinner in the process. 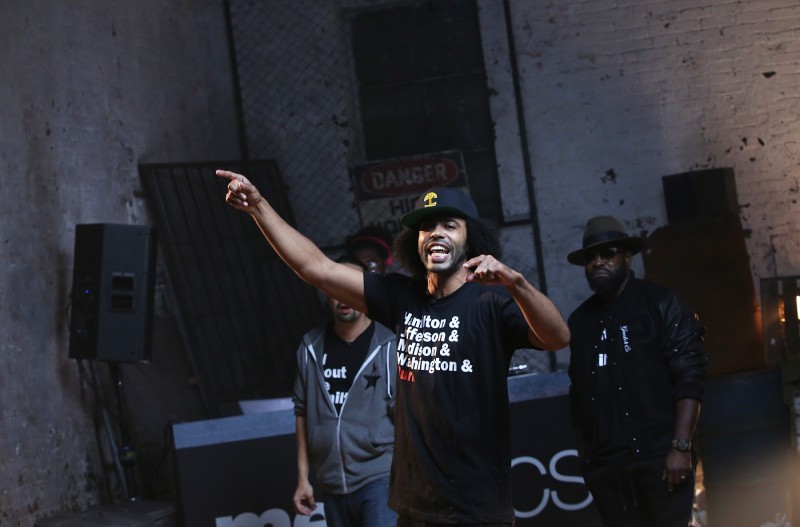 I have yet to see “Hamilton,” so I can’t really speak on the cross-cultural high from witnessing Alexander Hamilton’s story told through a hip-hop, coming-of-story lens. But if the Hamilton cast BET cypher serves a tiny sample size of the Broadway musical, then man, I better hop on StubHub quick. Creator Lin-Manuel Miranda, Renee Elise Goldsberry, Daveed Diggs and the Roots’ Black Thought offer quirky quips and rhymes not just to show off their individual lyricism, but to pay testament to Miranda’s vision that hip-hop’s boundary-less approach can be found and applied throughout history. Notch that up to the fact that the cast recording is up for a Grammy, had the highest entry in the Billboard 200 at No. 12 for a cast recording AND debuted at No. 3 on the rap charts. Now, as if folks didn’t know already about Miranda and Co., that BET Cypher certainly let them know now.

Following the tragedy of the Paris attacks, national and global scrutiny was unfair, unjust and unwarranted towards Islam, solely based upon the actions of radical, extremist group ISIS. It bolstered an ugly side of humanity, one driven on prejudices and ignorance that plagued not just those living in France, but the United States as well, fueling a forest fire of xenophobia. Yasiin Bey, a devout Muslim, spoke out against these trains of thought in an interview with Ferrari Sheppard, stating, “A big f*ck off to ISIS. You don’t represent nothing about Islam or nothing about the Prophet.” He elaborates further: aligning the heinous attacks on Paris as “nothing new,” to what he has witnessed both stateside, referring to Tamir Rice, the racist threats at Mizzou and during his time in South Africa, he alludes that innocent lives are taken and justifies such actions. In a cruel world where the media is quick to shine a light on only one side of the story for its receptors to believe as wholly true, Bey is one of the few in Hollywood – and in hip-hop, alone – to use his platform to speak against these trying times and social ills, offering a bit of perspective from a well-traveled, well-cultured humanitarian. In the interview he closes with, “Love must and will prevail. I don’t care how corny it sounds. The world has been in a state of emergency. The problem is not Islam [or] organized religion. The problem is people’s lack of compassion and care for themselves and their fellow human beings. We don’t treat each other well. We need to treat each other better.”

Lil B curse proving to be real via James Harden

The request was simple: all Houston Rockets guard James Harden had to do was pay homage the originator of the cookin’ dance and Brandon McCartney would lift the infamous Lil B curse off of the NBA All-Star and all would be fair and even in the 2015 playoffs. But nah. As non-defensive as he is on the court, Harden became defensive of his right to the cookin’ dance ownership and ultimately, paid the price. The Houston Rockets went on to flame out in theWestern Conference Finals, dropping out of the running after losing the series to the Golden State Warriors, 4-1. You’d think Harden would’ve learned not only from first hand experience of the Based God’s power, but also from the curse’s clutches that remain on former teammate, Oklahoma City Thunder superstar Kevin Durant, but alas… the curse lives.

2015 was major for Drizzy Drake and if the subsequent drama with Meek Mill beef elevated Aubrey to the higher levels of thuggery he so sought after with “If You’re Reading This, It’s Too Late,” the video for “Hotline Bling” brought him back down to earth. Anyone that’s familiar with the Internet knows that Drake is a goofball through and through (usually around athletes, i.e. DeMarcus Cousins and LeBron James) and the “Hotline Bling” video did nothing but prove how that works in his favor. Whether it was his grandpa sweater to go along with his grandpa dancing, the memes, Vines and GIFs that followed plastered Drake on everyone’s group texts and Twitter feeds. And that’s exactly what he wanted. Drake isn’t so caught up in being a head honcho that he can’t laugh at himself, which just adds so much more to his allure above all else.

Bless up. We the best. You’re loyal. I appreciate you. Another one. Another one. Sound familiar? No? Whatever rock you’ve been living under, DJ Khaled’s hashtag friendly mottos should’ve permeated the surface by now. The guy is everywhere. His motivational video has driven his fame to a level high enough to birth his own Snapchat tags, won him slippers marketing the slogans and allegiances with NBA players, rappers and major brands. Khaled on Snapchat isn’t the most interesting person, but he certainly is the most entertaining in that he’s so about himself and believes in his own hype that the ridiculousness is borderline infectious. Think of him as a Based God, but with more money. The day a DJ Khaled curse comes to fruition, be prepared to pay blessings to the major key.

In 2015, no one forgot about Dre. On top of becoming rap’s first billionaire in a contract with Apple, Dr. Dre made his return to music with the “Straight Out of Compton” soundtrack and forever debunking “Detox” rumors. “Compton” was Dre’s dominating return to the studio, harboring young talent like Anderson .Paak and Kendrick Lamar to denounce any doubts that Dre had turned Jay Z and remained just a businessman. Overall, it was a successful year for the doctor, creating a soundtrack for his life story and his city in one turn. But as with any triumphs, there are tribulations to match as the “Compton” film received much scrutiny for the omission of Dre’s assault on Dee Barnes and several other women throughout his career. For some, Dre’s apology is better a little late than never, but for others it was a little too late and shed a dim light on NWA’s legacy. Whether the bad blood is still bubbling, or reduced down to a simmer, in 2015, Dr. Dre’s mark still remains to be explosive.