A new sci-fi fantasy film to watch over the holiday weekend. 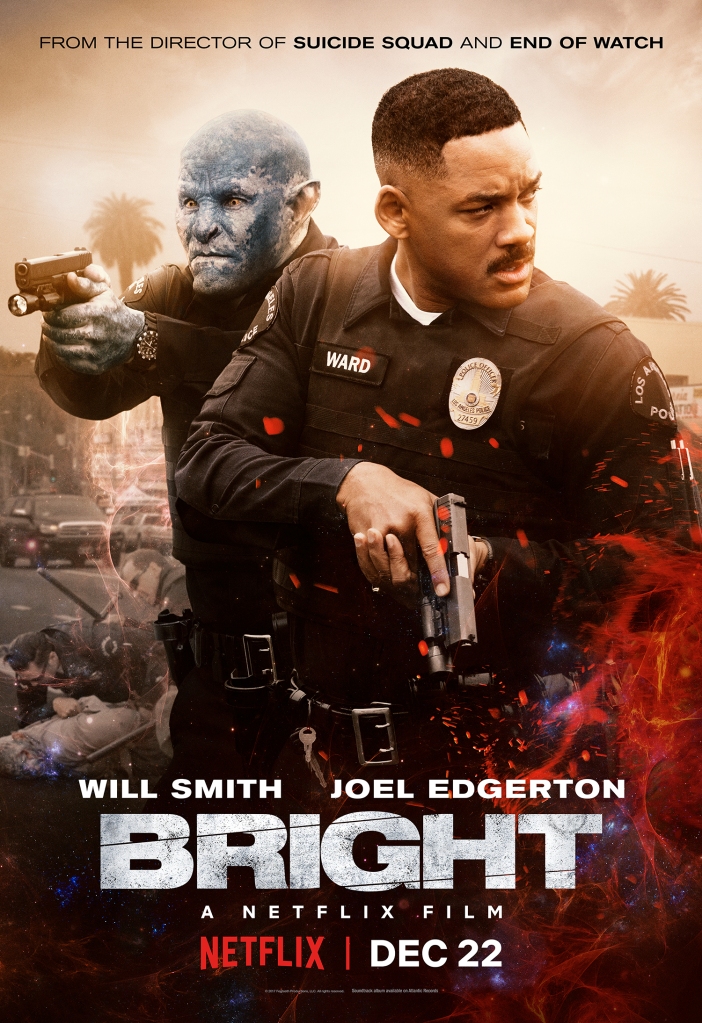 The introduction scene plays like a similar cop/detective film we’ve seen come from Hollywood in the past 2 decades: gritty streets, smog-filled air, and cops patrolling a sketchy neighborhood. Except this film incorporates other themes and attempts to build a hybrid genre of some sort. This is quickly apparent when we see LAPD Officer Ward (Will Smith) banter with fellow cop partner Officer Jakoby (Joel Edgerton.) Jakoby isn’t human, he’s actually an orc, or at least what director David Ayer imagines an orc to look and behave like. In this alternate universe, Los Angeles is filled with elves, fairies, dragons, orcs, and probably other similar supernatural creatures not yet introduced. The scenes were clearly made to look as familiar as possible to residents of L.A. and for viewers who might already have an image of L.A. on their minds. MacArthur Park, South Central, Downtown, Warehouse District, and Santee Alley are just a few L.A. areas you’ll encounter. In a way, they provide the perfect disguise for the fantasy theme that beats at the heart of the film. Gang wars, corrupt cops, racial tensions (orcs vs elves), and social class divisions round up the film and create one theme that we can comprehend and tie in everything together. While the dramatic impact would have definitely been more exciting on the big screen, this is clearly one of the best Netflix Original films to date and justifies their dominance over streaming media.

About Bright: Set in an alternate present-day, this action-thriller directed by David Ayer (Suicide Squad, End of Watch, writer of Training Day) follows two cops from very different backgrounds (Ward, a human played by Will Smith, and Jakoby, an orc played by Joel Edgerton) who embark on a routine patrol night that will ultimately alter the future as their world knows it. Battling both their own personal differences as well as an onslaught of enemies, they must work together to protect a thought-to-be-forgotten relic, which in the wrong hands could destroy everything. The Netflix film stars Will Smith, Joel Edgerton, Noomi Rapace, Lucy Fry, Edgar Ramirez, Ike Barinholtz, Enrique Murciano, Jay Hernandez, Andrea Navedo, Veronica Ngo, Alex Meraz, Margaret Cho, Brad William Henke, Dawn Oliveri, and Kenneth Choi. The film is directed by David Ayer and written by Max Landis. David Ayer, Eric Newman, and Bryan Unkeless serve as producers.